Man this month slipped away! Working on scene combination for Hot Rod Girls Save The World. I now have a few 10 scene stretches that mesh very well. It's one thing to edit a stand alone scene, it's another to group it with it's adjacent scenes and have a working section of film. So far so good. Also built a slot car track for our arts school, coordinated a long distance interview for Melinda Miles for Go-Kustom TV and proofed a long distance photo shoot by Lurleene Luxe for Go-Kustom Rekords. I need 3 assistants to keep the pace. Some day.
Posted by D.A. Sebasstian at 3:40 PM No comments:

This is some serious shite! Heard about it on the internet and Coast To Coast AM. Presidential Directive 51 (White House Press Release) has now made President Bush into Supreme Dictator Bush! Goodbye USA hello ECG (The Enduring Constitutional Government) In the case of any catastrophic event in the US or abroad, Bush has signed a Directive stating that the Executive Branch will control all branches during this Catastrophic Emergency. This is to ensure that our Constitutional Government survives. Say what!?! Since when has a Dictatorship morphed back into a Democracy? Once the power is centralized (as it has been becoming) then it stays that way until another Catastrophic Emergency arises (usually a revolution by the people). I am not a conspiracy theorist, just a concerned American. This has gone to far, and the mainstream media has said nothing about it. You would also think the Congress would be pretty upset about a Directive that intentionally excludes them from the Post Catastrophic America. Thing is the President makes the call as to what is a Catastrophic Emergency. Anything from a Katrina like natural disaster to another Terrorist Act. At this point I can only shake my head. 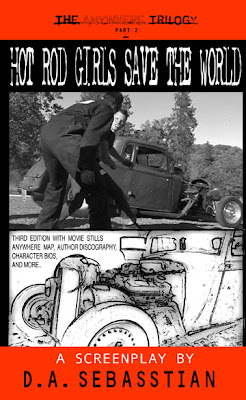 Happy Mothers Day Momma! I've been condensing scenes for the movie and assembling sections to see how the various scenes fit together. This is the beginning of the end. I've also revamped the Hot Rod Girls Save The World Screenplay with a Third Edition. New Cover Art, extra movie stills, Anywhere, Washington Map and Character Bios. Rented the Peter Gunn TV Show DVD (part one of a two part set put out by A&E). Wicked! Big Dodges, Chryslers and Plymouths with huge tail fins cutting through the night, film noir black and white style, beatniks, gangsters and mob bosses. This was a great show! The Henry Mancini music is unbelievable. I gotta buy this set, Also watched Deja Vu (very good), The Queen (boring), Flushed Away (excellent), The Last King Of Scotland (scary & an incredible story). Did I mention I'm shopping for an Agent to pitch the Anywhere Trilogy? I started writing the prequel to Hot Rod Girls Save The World, The Legend Of D.B. Petty: Street Racer last year as well as taking notes for the sequel Memories Of The Planet Earth. I think I'm going to write D.B. as a novel first (adjusting to a screenplay as I go), so once it gets published it will be an easier sell to make it into a film. I'm going to need $40-50 million to make this film properly. A similar budget to remake of The Dukes Of Hazzard. Mostly for the car crashes, stunts, set construction and to secure major major talent. Of coarse Memories will be even more as it is ALL SPECIAL EFFECTS. It all depends on how Hot Rod Girls does at the festivals and box office. Look for the Hot Rod Girls Save The World Comic Book and Coloring Book later this year.
Posted by D.A. Sebasstian at 3:37 PM No comments: