Hot Rod Girls Save The World Character Bios For DVD 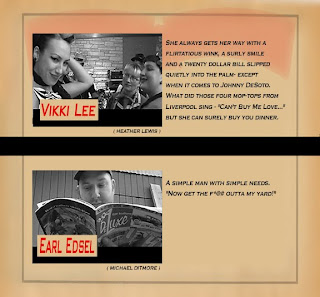 Been working all day on the character bios for the new Special Features disc which is part of the Hot Rod Girls Save The World (Kustom Edition) DVD that comes out in February, 2010. I decided to fill this disc up with info, behind the scenes clips, maps, etc. so fans of the film could see how much work has gone into character development, back story and all other aspects of this B-Movie. As the Anywhere Archive Series grows with subsequent films, comic books and novels most of this will be explained. These character bios are basic screen shots that have a forward and back button. I used a scan of a 1950s Mechanics Illustrated aged page for the antique page background texture.
Posted by D.A. Sebasstian at 5:45 PM No comments: 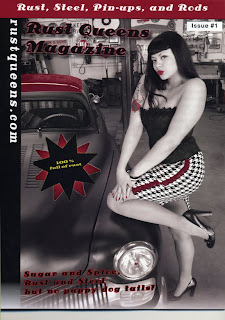 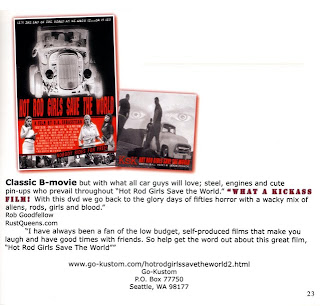 Got a nice review of our film Hot Rod Girls Save The World in the new (and first) issue of Rust Queens Magazine.
Posted by D.A. Sebasstian at 3:05 PM No comments:

The swelling in my hand and finger from Dee Dee's (the studio cat) "love bite" are way down. Crazy how quick the infection can spread. I've never had that happen before. I might be able to play bass again in a few days. Today I will be working on the Hot Rod Girls Save The World Special Edition DVD. This has been taking way longer than I thought. I really want to be editing Rat Rod Rockers! right now. Also had a good talk on the phone yesterday with Craig Wilson @MentalEclectic about city to city screenings of various indie-films and shorts. He is showing Hot Rod Girls Save The World tonight in San Diego in his Bedlam Cinema Series.
Posted by D.A. Sebasstian at 6:34 AM No comments: 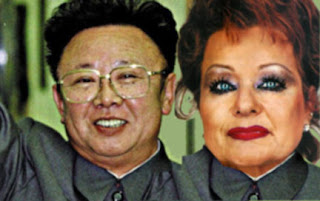 Kim & Tammy Forever! IN HELL! Made this little tribute to the wacko fashionistas. Don't they look related?
Posted by D.A. Sebasstian at 9:53 PM No comments:

Bite The Hand That Feeds 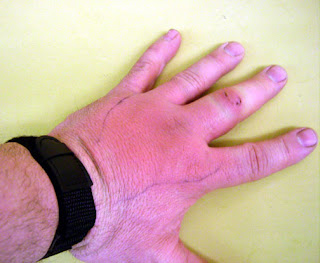 Two nights ago my studio cat, Dee Dee, took a good chomp on my middle finger knuckle. I was combing her with a flea comb and hit a spot she didn't like and so she bit down on me- to the bone. She has bit me before, but this one got infected. Last night I ended up going to the ER on advice of a nurse friend, saying I might get serious infection. I ended up on an antibiotic IV drip and was discharged a few hours later with prescriptions for more antibiotics. My whole hand is now swollen, but the red streaks on my arms from the infection are gone. I am supposed to monitor the wound and if it increases in swelling or pussing or whatever, go back to the doctor people. The pen marks on the photo are from the nurse to mark the edges of the swollen areas for monitoring. Is that an accepted medical technique- drawing on the patient? :) Fun.
Posted by D.A. Sebasstian at 5:01 PM No comments: 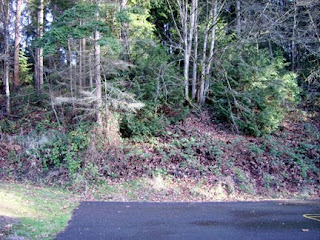 Sunny Seattle day. This is the view outside of my recording studio. The sun is out and the air is crisp. Been rendering a new version of Hot Rod Girls Save The World for the up coming Kustom Edition DVD. This has been ongoing for the last four days! It takes Quicktime 26 hours (on my little 733 G4 Mac) to compress the 19 Gig file to a 4.2 Gig sized file that will fit on a standard DVD. It takes Compressor about 8 hours (as opposed to 26 hours) to compress the same file. The hard part is getting the largest file size that will still fit, but not going over. It's hit or miss with each try taking 26 hours!
Posted by D.A. Sebasstian at 3:07 PM No comments: 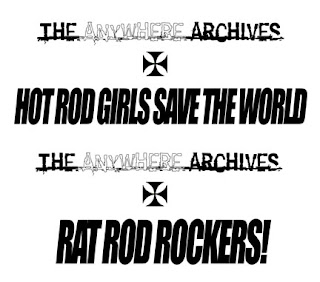 Made a big decision yesterday to switch my film project concept from a Trilogy to an ongoing series. Essentially Rat Rod Rockers! my new film (out mid 2010), was not a part of the Trilogy concept, but has one of the Anywhere characters (Dutch) as well as taking place in my make believe town- Anywhere, Washington. This was bugging me for awhile, but what to do? Make a four part Trilogy? I started thinking about Lord Of The Rings with The Hobbit being the oddball book. Rather than go that route and wanting to do quite a few more films and novels in Anywhere, I thought more of The X Files or Martian Chronicles than Star Wars or Lord Of The Rings. So, Files, Chronicles = Archives. The Anywhere Archives will be my series name, encompassing (so far) Hot Rod Girls Save The World (2008), Rat Rod Rockers! (2010) The Legend Of D.B. Petty (2011) and Memories Of The Planet Earth (2012). I am also thinking of writing The Legend Of D.B. Petty in novel form before screenplay form. Now I need to go and change all the artwork. I already did on the new Kustom Edition of Hot Rod Girls Save The World that comes out in February (cover and opening film titles). Still need to get the websites, etc.
Posted by D.A. Sebasstian at 11:40 AM No comments: 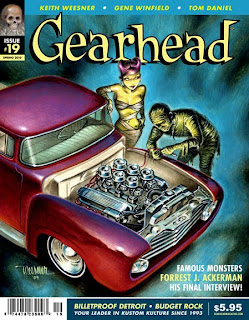 Heres the issue of Gearhead Magazine (Issue #19) that my in depth interview I did with Tom Daniels is in. Tom is the creator of the Red Baron, S'Cool Bus, Paddy Wagon, Ice T and many other iconic Hot Wheels and model car kits that inspired several generations of young car builders to become Fabricators, Automobile Designers and Kustom Car Builders. His influence on turning youngsters into full blown Gearheads is undeniable.
Posted by D.A. Sebasstian at 8:02 AM No comments:

So the last week has been spent getting a new Indie-Film Coalition website active. We are calling it FilmEES for Film Education Entertainment Sustainability. Lisa Heselton set it up on Ning in just a few hours, right after I sent her the graphics I created for the top bar. We had been talking about doing this with several people on Twitter and now it is a reality. The basic goals of FilmEES is on the website as well as member videos, profiles and discussions. New members are joining everyday and some are pretty well know Indie-Film makers. We are putting together compilation DVDs and setting up a screener series to showcase members (and non-members) fillms. DIY!Website is www.filmees.com
Posted by D.A. Sebasstian at 12:44 PM No comments: