So I open my e-mail this morning and stumble across a new one from SIFF (Seattle International Film Festival). I open it eagerly and then read the first line- "We are sorry to inform you..." I stop and angrily delete the damn thing. So it looks like our Hot Rod Monsters Film Festival will be the Seattle premiere of Hot Rod Girls Save the World.
Posted by D.A. Sebasstian at 4:35 PM No comments:

Email ThisBlogThis!Share to TwitterShare to FacebookShare to Pinterest
Labels: Seattle International Film Festival Says "No" To Hot Rod Girls Save The World

Working all day on the alternative ending for the Second Edition of Hot Rod Girls Save The World. The Second Edition will have a main program 10 minutes shorter than the First Edition with the alternative ending coming after the end credits. The second version of the DVD will also be a dual layer disc (higher quality picture) with bonus features like deleted scenes and music videos. I'm hoping to have Hot Rod Girl Save The World (Second Edition) available late summer 2009.
Posted by D.A. Sebasstian at 4:34 PM No comments: 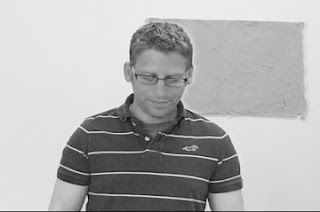 Another gang member has been cast for Rat Rod Rockers! Charles Kittay came over to the studio yesterday and read himself into our upcoming film. He's got that East Coast Thug thing down cold. Rat Rod Rockers! w official ebsite is www.ratrodrockers.com
Posted by D.A. Sebasstian at 4:33 PM No comments: 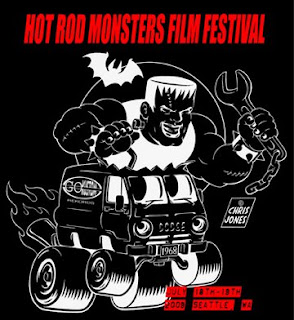 Uploaded some new Hot Rod Monsters Film Festival sticker and shirt designs on the Go-Kustom Cafe Press Pages. We also just added Hot Rod Havoc to the line up. This is going to be a great set of films! www.hotrodmonstersfilmfest.com
Posted by D.A. Sebasstian at 10:03 AM No comments:

So my Google Alerts (if you didn't know, you can actually set up a Google Alert so any "key words" that pop up on Google's Monster Search Engine, Google will send you an alert with the link so you can see how the key words are being used on that page) comes up with a new review for my film Hot Rod Girls Save The World. I bounce over to the review page and low and behold it rips my film a new arse hole. The thing it, I can tell it is an honest review. The guy really didn't like my film. A part of myself is a little hurt and pissed off, but after twenty years in the music business I have seen it all. Bad reviews don't bother me as much as inacurate (misspelled on purpose) ones. I remember on our first album (band Kill Switch...Klick) this reviewer talked about our typical industrial "guitar sound." This really pissed me off, because we used no guitars- at all. I played an instrument I built and designed called a Slambar. It has open strings and I bang on it with two screw drivers. The guy ranted on about something he had no clue about. The review was not so bad, but it was that inaccuracy that really pissed me off. I sent him a "fuck you idiot" post card and his next review for our next album was much more accurate and calm. He even mentioned the postcard in this next review years later. Looking back I think I was a bit over reactive, but it's part of the learning curve.

So fast forward to this current bad review. Does it matter? Yes and no. Yes it helps me to get honest (at least in this case) feedback from people and how they feel about my film. No in that I can't change my film so that everybody will love it (especially film critics, who typically have a holier than thou attitude towards their subject matter). That "Film That Everybody Loves" can not exist in this world. I remember when I first became a Punk around 1981. All my Head Bangin' Buds thought I had truly lost it. I would play Talking Heads, PiL and Circle Jerks for them and they would all say how bad my new musical tastes were. They would say how these New Wave Punks couldn't play their guitars and needed voice lessons. Were they wrong. No- that was their uninformed opinion and everybody knows opinions are like assholes...everybody's got one. I think of Hot Rod Girls Save The World in this light. It's not for everyone, or even a majority of film viewers. It's a strange and unique film that was made for creativity's sake, not for money or Cannes or Oscars golden stare. It is slowly finding its own rabid audience and advocates much like early Punk Rock.

So how do I feel about my film? I honestly think it is the greatest fuckin' film ever made. I really do. I can watch it over and over (and have had to- during the editing process). It has all the elements I love in film- quirkiness, artistic integrity, gorgeous cinematography, great music, pretty girls, wicked cars, mud wrestling, aliens, zombies, car chases, fist fights, dry campy dialog, etc. etc. Am I allowed to love my own film? Ask David Lynch if he loves Eraserhead. Ask George Lucas if he loves THX-1138. I hope to make dozens more movies, but I know this will always be my favorite.
Posted by D.A. Sebasstian at 1:08 PM No comments: 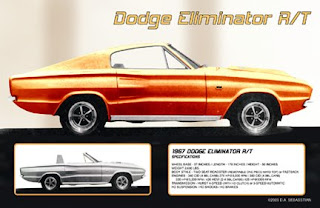 Not satisfied with my Mini-Charger GT Concept I cobbled together from an old Dodge Charger press photo, I kept messing with it until I ended up with the "Dodge Eliminator R/T" poster you see here. Why you ask? I don't know. It's just kinda fun to mess around with Photoshop and Illustrator this way. As if I don't have enough stuff on my creative plate. Why the name "Eliminator" you ask? Isn't that a name Mercury used for a high performance Cougar you say? In fact that is correct. Mercury used the name in 1969- but Dodge actually had considered the name first, in the mid sixties as a potential name for their new pony car, which as we all know, ended up being called the "Challenger." You don't believe me you say? Read Paul C. Zazarine's book Barracuda & Challenger. Some great info on the Dodge and Plymouth Pony Cars. I also wrote another Dub tune called Dubnag. This stuff just falls out of me sometimes
Posted by D.A. Sebasstian at 1:05 PM 1 comment:

This is one of my Phantom (What If) concept cars. What if Dodge decided to make a Coronet/Charger styled car to compete with the Mustang and Corvette ala AMC's AMX (i.e. making a two seater that doesn't look that different from some of the marques other cars).. The AMX was essentially a shorter version of the Javelin, so by shortening the wheelbase AMC got two cars for the cost of designing one. This is the basis for this concept- a Dodge Charger GT or Coronet Sport. Based on a shortened Dodge Dart chassis the Dodge Sports car would have a large engine bay, enabling all of Chrysler's power plants to be available. Maybe I'll commission a 1/1 scale build someday.
Posted by D.A. Sebasstian at 10:04 AM No comments: 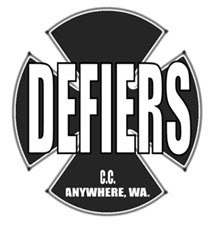 Getting the Car Club names and logos ready for Rat Rod Rockers! The town has several gang/car clubs that do all the dirty work for various local mobsters. The Defiers was one of my fave gang names and the first logo I designed. I used a St. Florian Cross with rounded edges. It does look a bit like the Firefighters Cross Logo, but what the hell it's only a movie. I do all the graphics for my films- logos and signs are actually a big part of prop and costume design for films.
Posted by D.A. Sebasstian at 9:13 AM No comments: 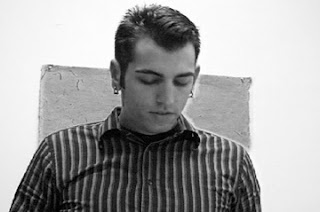 After his reading last week, we officially selected Cameron Black as one of the lead gang members for Rat Rod Rockers! Welcome aboard Cameron!
Posted by D.A. Sebasstian at 9:11 AM No comments:

Oscars Are For Sissies 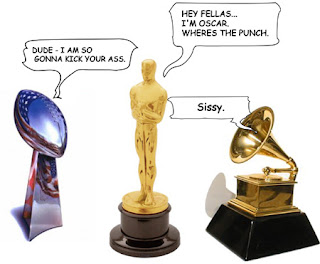 I keep reading my film Hot Rod Girls Save The World will never win an Academy Award. All I gotta say is- "So what, Oscars are for sissies!"
Posted by D.A. Sebasstian at 9:37 PM No comments:

Email ThisBlogThis!Share to TwitterShare to FacebookShare to Pinterest
Labels: hot ord girls save the world 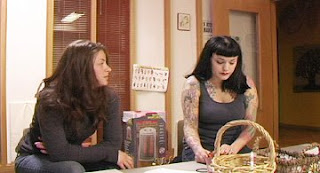 We held an actors meeting last night for the girls of the fictitious "Milldue Family." They are some of the central characters of Rat Rod Rockers! We ran some lines, talked wardrobe and checked character chemistry. These kinds of meetings really help me in writing the screenplay.
Posted by D.A. Sebasstian at 11:23 AM No comments: 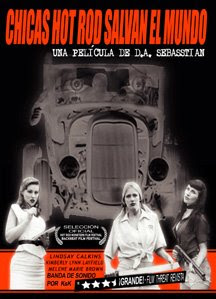 Just completed the Spanish Language DVD covers for Chicas Hot Rod Salvan el Mundo (Hot Rod Girls Save The World). The actual translation by Rubi Romero is half way complete and we will start overdubbing in the next few months.
Posted by D.A. Sebasstian at 4:21 PM No comments: 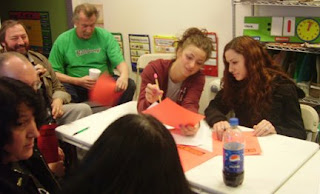 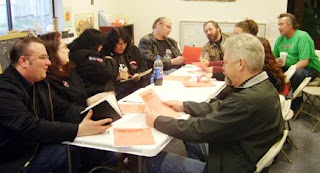 We had our second Rat Rod Rockers! pre-production meeting yesterday. Mostly discussing the shots we need for the movie trailer and locations. The farm house lead we had didn't pan out. Looks like we got a good crew for this film.
Posted by D.A. Sebasstian at 11:05 PM No comments: 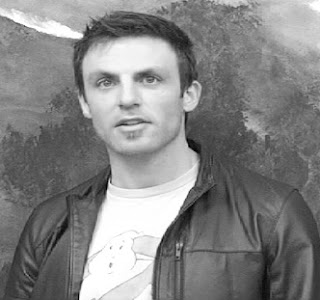 After two weeks of screen tests, we finally selected "Harold" for Rat Rod Rockers! His name is Aeon Black and his comedic take on Harold fit the bill. Only a few smaller parts to cast and we will be ready for character development for Rat Rod Rockers!
Posted by D.A. Sebasstian at 1:23 PM No comments: 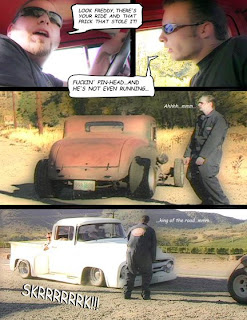 Started the basic layouts for the Hot Rod Girls Save the World graphic novel series. These are just stills from the film laid out for the illustrator, Lillian George who will use the stills as guides and draw the comic vased on that.
Posted by D.A. Sebasstian at 1:21 PM No comments: