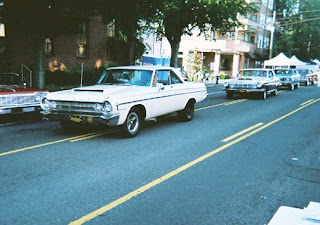 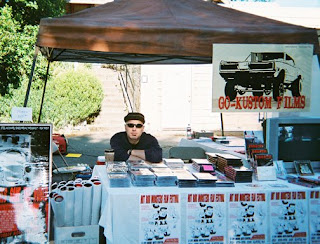 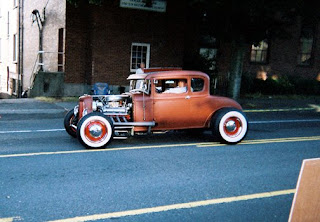 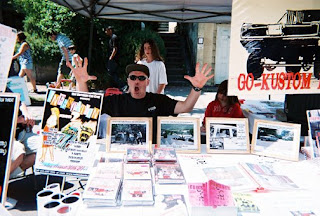 We had a vendor booth for Go-Kustom at the Greenwood Car Show. Great turn out, great weather. Several Pin-Up Angels stopped by to help pass out flyers for the Hot Rod Monsters Film Festival. Estimates for this years event are over 29,000 attendees!
Posted by D.A. Sebasstian at 10:43 AM No comments:

My Encounter With The Ghost Of Kurt Cobain (True Story)

My band Kill Switch...Klick was playing a show at the OK Hotel (Seattle) shortly after the news of Kurt Cobain's suicide (middle of April). Not being big Nivana fans we had a twisted cover of Come As You Are in our set, in which I had sampled Killing Joke's Eighties (for those of you that don't remember Killing Joke had sued Nirvana, because the opening bass line for Come As You Are is very similar to the main guitar line in Eighties). So people laughed at the song and all was good fun. That night, halfway through Come As You Eighties the lights flickered and our side fill P.A. system went KAPOW! The show stopped and I told the audience to hang tight (the mic still worked) as I dug around the back of the system. A blown fuse was the culprit and after about 15 minutes we were up again. Same song, last verse...KAPOW! Another fuse had blown. I looked blankly at the band, who was looking blankly back at me. Now that never ever happened with our sound system. It was a Carvin, built like a tank. I joked to the audience "Maybe Kurt doesn't want us butchering his song." They laughed and right then I got a strange chill. I felt like someone was behind me (besides my drummer Mike). I changed the fuse and we skipped Come As You Eighties and finished the set without further incident. The whole night got me to thinking about Kurt Cobain and his musical legacy. I decided to pull the song from the set and guess what? We never blew a P.A. Amp fuse (on our system) again. No lie.
Posted by D.A. Sebasstian at 11:58 AM No comments:

Just set up a Twitter page at http://www.twitter.com/gokustom
Posted by D.A. Sebasstian at 9:32 AM No comments:

We just signed a non-exclusive distribution deal for our CD & DVD titles with Victory Media. Should help get us up on Netflix, Block Buster, etc. This is additional distribution and will not effect any of our current outlets.
Posted by D.A. Sebasstian at 9:34 AM No comments: 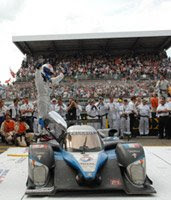 Peugeot took the overall win at Le Mans this year with their number 9 car driven by David Brabham (whose brother Gary won with Peugeot 16 years ago), Marc Gené and Alexander Wurz. I watched all yesterday afternoon on Speed Channel. This is a big deal for the French as the race is French and Peugeot is French. Love watching the night racing (because of the time difference it was afternoon Pacific Time). I was rooting for the Audi diesels but it was not in the cards. We also rented The Curious Case Of Benjamin Button. Great film, but a bit longish (hey that's what they say about my film!)
Posted by D.A. Sebasstian at 9:31 AM No comments:

Email ThisBlogThis!Share to TwitterShare to FacebookShare to Pinterest
Labels: lemans

We had a blast on the film panel at this years Crypiticon. Got to show a 10 minute clip of Hot Rod Girls Save The World and then do a Q&A session about the film and film making in general. Had around 80-90 attentive people in the Lopez Room where the panel was held. Before the panel, waiting outside to get in, I was talking with Adam Gerke (Traffic Guy from Seattle FOX Q13 TV) about his new Zombie film called The Book Of Zombie, about a Mormon only zombie disease that effects a small Mormon town. Funny. Also the guy next to me on the panel had won an oscar for best foreign documentary and was now making zombie films? Zombie is the new red. Anyway gave out tons of promo and Screener DVD's. Saw Shawn Shelton (who plays The Stranger in Hot Rod Girls) working the Costume & Display Booths (Hi Shawn!). Also said hi to Adrienne Barbeau and nearly bumped into (literally) Troma Films guru Lloyd Kaufman. Good times.
Posted by D.A. Sebasstian at 4:26 PM No comments:

Email ThisBlogThis!Share to TwitterShare to FacebookShare to Pinterest
Labels: crypticon

Spent all day Sunday helping with creative input for a photo shoot we set up for an article I am writing for Car Kulture Deluxe. Can't say much- it's kinda hush hush, but it includes some wicked Fords, Hot Rod Heidi and was shot by Mr.Ric Merry. This one is on the fast track so it should be in print very soon.
Posted by D.A. Sebasstian at 10:18 PM No comments: