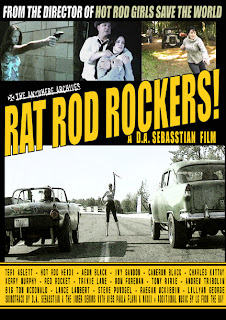 Made some adjustments to the cover art of the Rat Rod Rockers! DVD. The first version looked to top heavy so I shifted the pics around to give the cover a better balance. It still is a little busy, but is eye catching. I try and make covers that if I saw in the Blockbuster shelf or Netflix webpages I would be interested in.
Posted by D.A. Sebasstian at 1:41 PM No comments:

Started laying out the Rat Rod Rockers! DVD menus and content last night. We have to get this into the pressing plant by January so I am jumping into the layout. The disc will have the film (obviously) and special features including a blooper reel,  Anywhere Archives info (that's the series that Rat Rod Rockers! and Hot Rod Girls Save The World stories are both in), movie character still slideshow and movie trailers. This is going to be a limited run of 1,000  DVDs to start with. I will decided if I want to use CreateSpace services (part of Amazon) a little later for additional online sales. I was originally going to hold off on pressing Rat Rod Rockers! until after we screened it in West Coast Theaters, but after some lengthy conversations with various indie-film insiders I decided, "what the hell," let's get this thing out to the masses.
Posted by D.A. Sebasstian at 11:18 AM No comments: 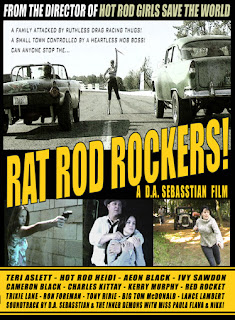 Happy Thanksgiving people! Did some work on the Rat Rod Rockers! DVD covers today and advertisements for our first big push of the film. The DVD artwork still needs some adjustments, but the First Edition cover looks pretty darn good. We have set the DVD Release Party and Seattle Premiere for March 26th 2011, at the King Cat Theater in Seattle. We are going to also gave a pin-up contest, bands and a small car show in the side parking lot of the theater. Should be a big night.
Posted by D.A. Sebasstian at 12:20 PM No comments: 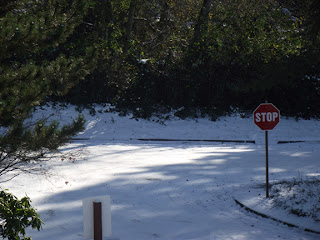 Last night we had more snow around the greater Seattle area. Today the sun came out- but it's below 32 degrees F so it's not melting much.
Posted by D.A. Sebasstian at 3:27 PM No comments:

Some more pics by the Mighty Zombie Crush team! 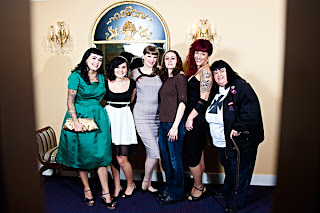 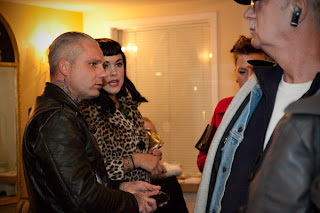 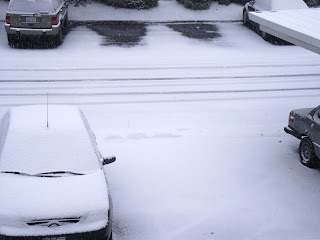 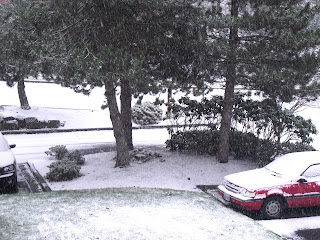 We got a little snow the last two days in North Seattle, just enough to cause traffic snarls and the early school closures. We don't have the snow plows and snow clearing infrastructure of the Eastern States so it gets messy quick.
Posted by D.A. Sebasstian at 1:00 PM No comments: 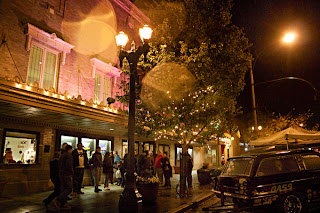 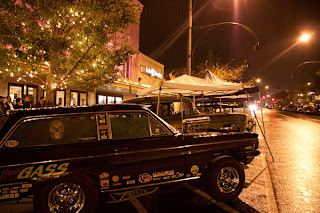 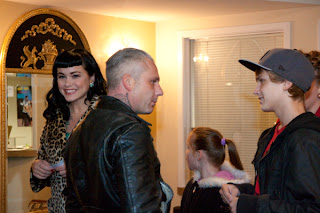 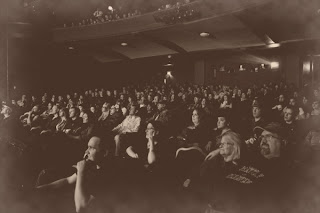 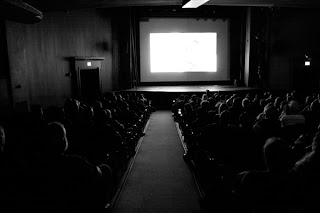 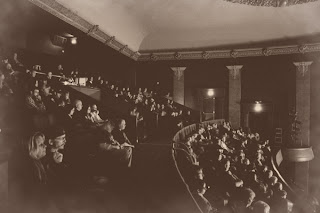 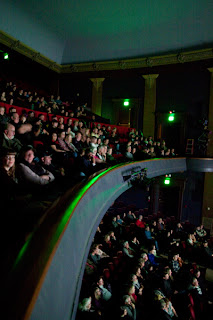 Some more pics from the November 13th, 2010 World Premiere of Rat Rod Rockers! by Zombie Crush.

Spent the last few days recuperating from the massive push to Premiere Rat Rod Rockers! and the months of endless editing. I still have to tweek the audio and add a song or two into the audio mix, but the response to the film was immense and at least my fears of making a film that no one could relate too are fading. You never know when you create something how people will take it. If you worry too much during the process and try and make too many changes to satisfy what you think people will like, you end up with a white bread mayonnaise sandwich. On other fronts- I did manage to start a little push for the Munster Style publication we are doing, including getting bands lined up for a compilation disc that will accompany the semi-annual "Periodikal.' I will hit Rat Rod Rockers! full force next week and knock out the audio in a few weeks. I am also working on a Seattle Premiere of the film for February or March of next year.
Posted by D.A. Sebasstian at 10:21 PM No comments: 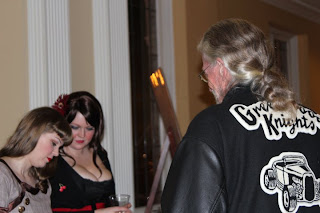 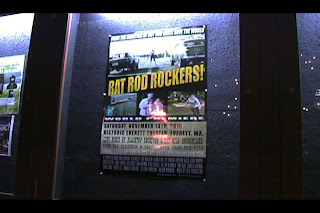 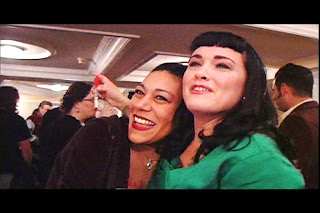 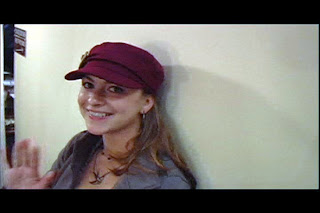 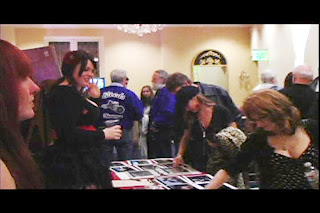 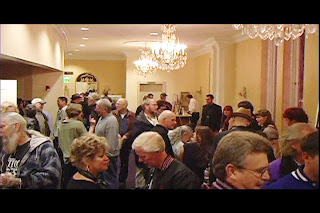 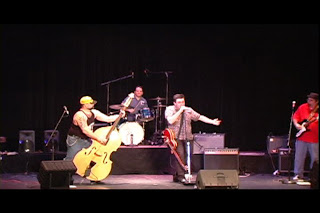 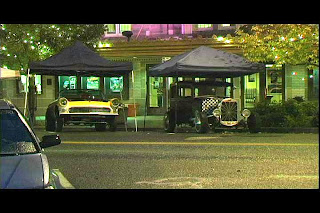 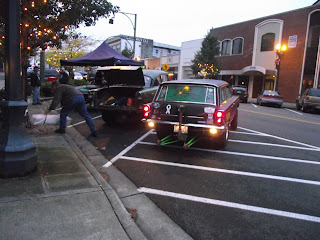 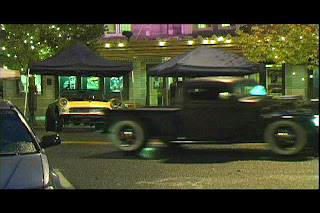 Man what a night! We had over 400 people show up to our World Premiere of Rat Rod Rockers!  at the awesome Historic Everett Theater in Downtown Everett last  night. We (my family and I) got there at 4 PM to start setting up our   merchandise and actor autograph tables. Many of the Rat Bastards Car Club, who have cars featured in the film, came soon after parking their  "Movie Cars" in front of the theater. It looked kill! Doors opened at 6:30 and the first band, The Wild Snohomians, opened the show at 7 PM.  People began piling in, filling the lobby, actors tables, bar area and theater. I couldn't believe the turn out! We did a few radio announcements and ticket give-aways and had a few little blurbs in the papers, but no major advertisements. The theater can hold 800 people, but at 400 it seemed really crowed sometimes. Husband and wife photographer team Zombie Crush set up an actor portrait area to get promo shots of the actors at the Premiere. NW Live TC was there interviewing me and the actors and filming the event for their Internet TV Show. Rat Bastards Photographer Diane Jacobson was also snapping some great pics of the event. Besides the Rat Bastards members of  Steeds Car  Club, Greenwood Knights Car Club and Rumblers Car Club were  milling  around. After The Wild Snohomians finished their set, Blacktop  Deceiver  took the stage and kept the theater rockin' until it was time  to screen  the film. The Historic Everett Theater is a beautiful and  swank locale.  So upscale and perfect for any movie premiere. At 9 PM,  H.E.T. theater  manager Mike Olson took the stage and talked a bit about  what was coming  up at the theater. Then I jumped on stage and said a few words about Rat Rod Rockers! The crowd went ape shite! Once  the film got underway I hung out in the  balcony area checking sound and listening to the crowd. Man they were  into it! When 400+ people are sincerely laughing, cheering and applauding your work- it makes you  feel all warm and fuzzy inside. When  he film was done, the audience mobbed the me and the actors at the  signature tables with smiles and  praises for the film. I felt like my nine months of editing this bad  boy had paid off. Now granted the films  sound was not perfect, with odd  background noises and an uneven EQ in spots, but I was crazy under the deadline and just barely made the first cut in time for the Premiere. I still have to go back and message the audio, rerecord a song or two  and then RRR! will be truly completed. After the film was over,  The Wild Snohomians played another  set to close the evening. As the  crowd slowly filtered out over the next  few hours I felt happy knowing  people really enjoyed Rat Rod Rockers! and had a great night. We are setting the Seattle Premiere for February  or March, possible at  Northwest Film Forum or SIFF Cinema. I can't wait!
Posted by D.A. Sebasstian at 6:59 PM No comments:

Churning it out up until the last minute. Got many tracks set up in Cubase with correlating video files. Got a nice Gypsy/Baltic/Western/Surf/Mafioso tune together for Mob Boss Ivan. Used mandolins, myself singing baritone and some spaghetti western style guitars. Minimal but effective. I will have many tracks done by the Premiere next Saturday, but not all the music I want for the finished DVD version of the film. I will be tweeking this bad boy for months after the screening.
Posted by D.A. Sebasstian at 8:59 PM No comments:

Since I finished the rough cut a few days ago, I have been working on cleaning up the audio, adding in background sounds that were missing, tightening a few scenes and making music master files for arranging the music in Cubase. To work in Cubase, I have to export sections of the film with a separate video file, a dialog file and a working music file (un-arranged). This is complicated and I am sure I will be tweeking and tightening this film for months- long after the Premiere next week. Especially before Rat Rod Rockers!  goes to DVD.
Posted by D.A. Sebasstian at 5:46 PM 1 comment:

I was cruisin' around the internet and came across this site that has archives of my Go-Kustom website all the way back to 2001. Strange that someone would be interested in archiving my funky website. On one page was a pic I had posted of myself as a toddler eating cake. Forgot about that one. It is the imprint we leave. Now electronic. Strange indeed.
Posted by D.A. Sebasstian at 10:51 PM No comments: 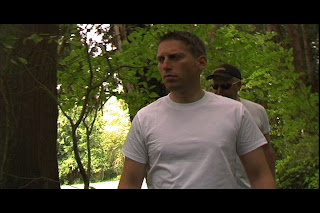 Just completed the rough cut (actually a bit better than a rough cut) completed tonight. Feels good. My second feature film is almost ready to screen. I still need to arrange the music, polish and mix the audio and tighten the overall edit. Man...
Posted by D.A. Sebasstian at 9:48 PM No comments: 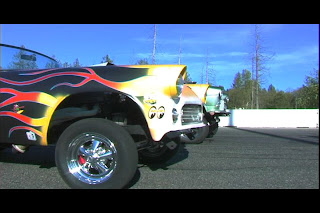 Yes! Just finished Scene 31- the Drag Race Scene! Only one scene left to rough cut, then on to audio fixin' and music arranging.
Posted by D.A. Sebasstian at 3:16 PM No comments: 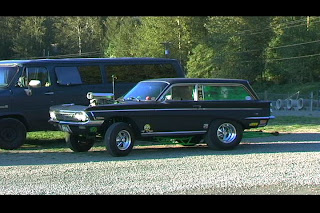 Completed Scene 30 of RRR! this morning. I am gonna have to go back and revamp the music bed for this scene, to adjust the cuts to the beats, but planned on doing that anyway. Two scenes left to rough cut! Of course then I have to go back and do the audio EQ, dialog adjustments, music rewrites, scene reordering/cuts, etc. But there is light at the end of the tunnel!
Posted by D.A. Sebasstian at 11:08 AM No comments: