Another Snow Day In Seattle 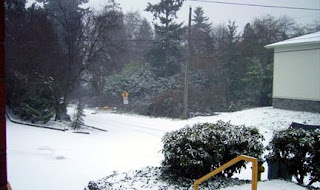 Another heavy dumping of snow in Seattle. Nothing like other parts of the U.S., but Seattle doesn't have the infrastructure to scrape and salt the roadways and all major roads get heavy travel- so three inches of snow quickly turns to pure black ice. When I was living in Maryland, the winters were much more snow laden and I don't ever remember this kind of ice on the roads. Plus Seattle has massive hills so even 4x4's occasionally slide sideways and backwards into oncoming traffic. Fun.
Heard some dire predictions by Gerald Celente on Coast To Coast AM last night. America in a total Depression bigger than the last one, with a possible American Revolution and the break-up of the U.S. into smaller nation states. Everything he said makes complete sense and I guess only time will tell. Hmmm...the North West America (N.W.A.) Kinda like it. Oregon, Idaho, Washington, then maybe B.C. could break out of Canada and join. Celente's reasoning for America to break apart would be a total melt down of our central government from lack of money to pay the bills. Thus people seek help in State Governments and Coalitions. Do the States really need the Federal Government? Who would get the Nukes? Like when the Soviet Union broke apart, Russia and Ukraine got the bulk of the nuclear weapons. Interesting scenario.
Posted by D.A. Sebasstian at 8:59 PM