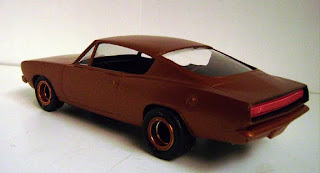 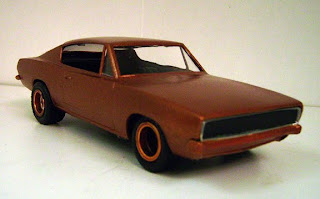 Besides editing work on Rat Rod Rockers! I also (after dinner) loaded Reason 4 to my computer and was simultaneously reconfiguring my wife's Mac to OSX (10.4.11). Turned out for me to run Reason 4 on Thing Two (my Mac G4 500), I had to upgrade to 10.4.11 as well. As I was waiting for both computers to download the upgrades I put the finishing touches on my 1967 Dodge Challenger Phantom (what if) Concept. The idea was- what if Dodge had used the Plymouth Barracuda platform (much like Pontiac and Chevy shared the Camaro/Firebird platforms) to introduce the Challenger in 1967 instead of 1970. To make a Barracuda more Dodge-like, I filed down the hood peaks and added a cut 1968 Dodge Charger grille as well as 1967 Dodge Coronet R/T tail lights. I think this represents a very realistic mock-up of what a Challenger could have looked like if introduced in 1967. Variations between the Challenger and Barracuda would be hood, grill and tail light assembly (exactly like the variation between Camaro/Firebird in 1967). I have always loved the outline of the 1967-1969 Barracudas, but never liked the split grill and hood peak.
Posted by D.A. Sebasstian at 1:05 PM