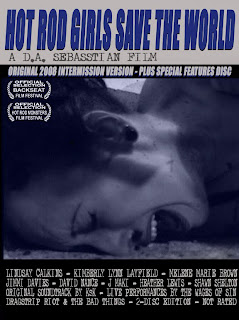 Got the basic cover art done for the newest edition of Hot Rod Girls Save The World the Original 2008 Intermission Version. Did this on Thing Two (my 500 mac G4) while waiting for Thing One (my 733 G4 Mac) to render bits of the Killing Machine music video. This edition will feature the original screening version we played at the 911 Media Arts Center back in 2008. This version was screened with a half hour intermission between parts one and two. The DVD will play part one then go back to the Menu so you can take a little break and then play part two. There will also be a "bypass" button so you can play the whole film uninterrupted. This set will also include the Special Features disc from the Kustom Edition that comes out next month.
Posted by D.A. Sebasstian at 5:45 PM

Email ThisBlogThis!Share to TwitterShare to FacebookShare to Pinterest
Labels: Hot Rod girls Save The World