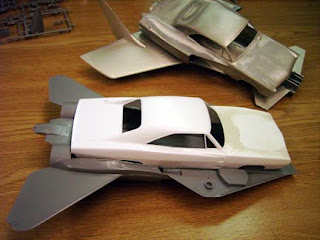 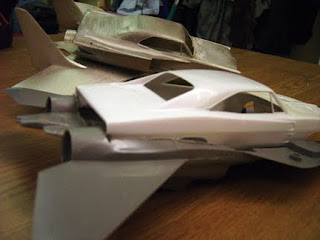 Decided that according to what D.B. Petty could have known about car wise in late 1967- to build a 1968 Dodge Charger Space Car called (aptly enough) the StarCharger II. In the background is the Intergalactic Muscle car the iGTO, which has been test painted with a nickle color. I love the Charger & GTO body styles from the sixties. Big cars by today's standards, but considered mid sized by theirs. These Space Cars are for the film Memories Of The Planet Earth, which is a sequel to Hot Rod Girls Save The World and part of the Anywhere Archives Series.
Posted by D.A. Sebasstian at 7:46 AM