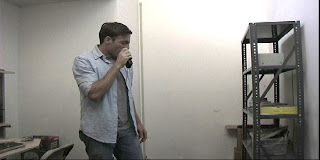 Finished Scene 11 for Rat Rod Rockers!. In the scene Harold Milldue (Aeon Black) is suffering writers block. At first I was gonna go straight with the cuts and then I noticed that for half the shots I had left the camera on a tripod, which is great for showing jumps in time (i.e. character jump cuts, but the room stays as is). So I went with a disjointed "writer blocked" Harold Milldue bumbling around the room with his tape recorder. Works well I think. I am starting to love this film!
Posted by D.A. Sebasstian at 11:12 AM