Piracy and The Non-Recording Artists 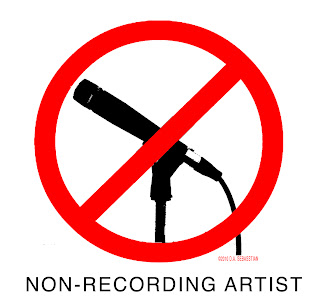 I recently was discussing a pseudo-scenario with a musician friend of mine, in which music pirating of MP3s becomes standard practice. This could happen by pressure from pro-pirating lobby groups on Congress to allow P2P sites to thrive, and a lack of enforcement finances available to internet pirating police agencies through budget cuts.
In effect, this would kill iTunes and similar pay websites and create a music free for all on the internet. As soon as a band or recording artist released a single or an album, it would be pirated to millions of users through (in our pseudo-scenario) legitimate P2P sites. Revenue would completely dry up for old classic rock and pop tunes by The Beatles, Rolling Stones, The Who, James Brown, etc. The recoding industry would collapse (which could be a good thing depending on your viewpoint). More pressure would be put on standard broadcast radio stations to pay extra to play music, eventually forcing them to switch to the more lucrative "talk radio show" format. Retired Rock Stars would be forced to come out of retirement and tour relentlessly for their age-old coke habits and mansion mortgages. Armageddon? Hardly.

This may also create what we deemed, the "Non-Recording Artist." If a band has no reason to record an album- why should they spend hours and hours in the studio or invest in hundreds or thousands of dollars in home recording equipment? Especially if they don't have too. These artists would fine tune their live shows to the point of perfection. They might add extreme elements like pyrotechiques, strippers (hell yea!), elaborate set design, video projection, etc. to make their concerts that much more appealing than the next bands. They would have friends film the show and post segments on YouTube, Facebook et al, to get the word out. They would use the filmed segments to get new shows by either e-mailing promoters links to their videos or by burning them onto Video CD/DVDs. With the YouTube clips in place, friends could e-mail or Blip.FM songs to each other and even make MP3 copies by playing the audio stream out of their computer and into a recording device. Since the band had zero investment in recording the song, monetary damage would be minimal. This "live only" approach could also generate higher volumes of concert goers and create real revenue for the artist or band, as you can not (currently) pirate a concert ticket. The band could also stipulate that no video or audio recordings be allowed at their shows. This would be hard to enforce given cell phone and mobile device technology- but making it illegal would actually stimulate the circulation of bootleg recordings of the band or artist. It is human nature to steal and share. Hey- if it gets more people to the shows, then it is a good thing.

The other upside would be bands would never sound different "live" than on their CDs & MP3s. They would always be in "live" mode. Potentially the hardest hit musicians in this scenario would be the studio only producers of hip hop and electronica- however with fewer artists in the studio, more deals would become available for films, TV Commercials and multi-media projects. This might also force more studio projects onto the stage to generate income.

All in all this really doesn't sound like such a bad pseudo-scenario for the music industry. Maybe that is where we heading, only time will tell.
Posted by D.A. Sebasstian at 10:36 AM