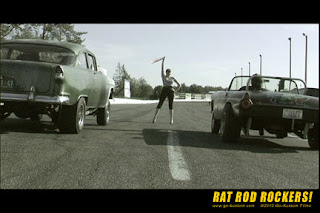 Booked a date for the Premiere of Rat Rod Rockers! (September 4th & 5th, 2010) and then realized that many key actors were not available for the event, reconsidered and then unbooked it. We are looking to rebook sometime in October. We will also screen Rat Rod Rockers! at the Hot Rod Monsters Film Fest (also late October). Since RRR! will not be going straight to DVD I want to screen it as much as possible. I will post the dates and locations when we firm it up on the Rat Rod Rockers! Website. Also completed some new Rat Rod Rockers! 8.5x11 Movie Stills for upcoming events. Signed copies from actors and myself will be on the Go-Kustom Website for $5 each (plus shipping).
Posted by D.A. Sebasstian at 9:29 AM