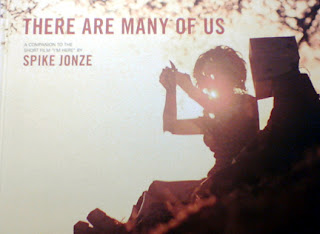 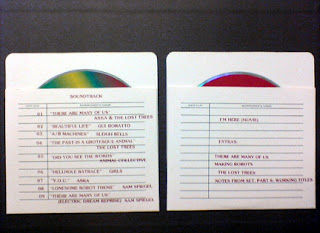 Got Spike Jonze's new work There Are Many of Us

via UPS yesterday from Amazon.com. Heard about this from the Creators Project internet TV show (on my Roku- of course). Spike has made a short film (30 minutes long) called I'm Here which has screened at various festivals and is available for free viewing at www.imheremovie.com. Being the old school filmee I am, I refused to watch it online in the hopes of buying a hard copy. After a brief look around Amazon.com, I found it available as a book, DVD  and CD combo called There Are Many Of Us (which is the title of the main theme song from the film). The packaging is awesome- I mean how else can you justify buying a 30 minute film for $20.00, but to make it available with a gorgeous hardback book and CD?

The film centers around two robot characters set in a current time alternative reality, where robots (some that eerily look like old Macs) do all the grunt work for the humans. The story is loosely based on The Giving Tree with Sheldon (bored masculine robot) and Francesca (fun loving feminine robot) playing the parts of the tree and boy respectively- though in an entirely different context. This is a very powerful and thoughtful film, even if it was sponsored by Absolut Vodka. I must say- Spike Jonze is truly a genius, one of my all-time favorite directors.
Posted by D.A. Sebasstian at 8:48 AM