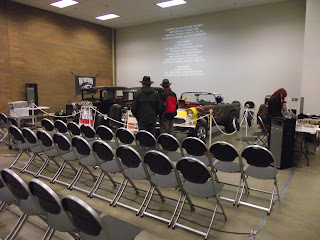 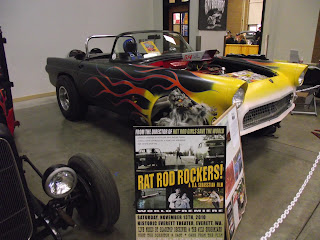 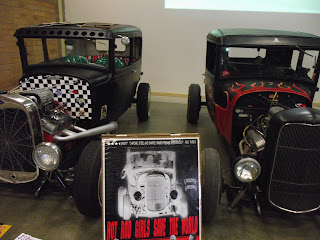 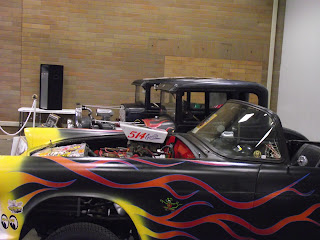 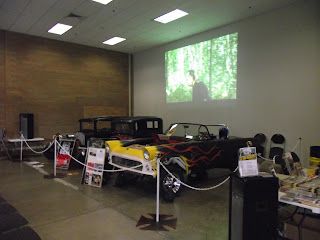 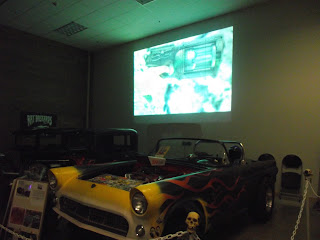 Gave multiple free screenings of Rat Rod Rockers! Friday and Saturday (April 1st & 2nd) at the Mild To Wild Car Show in Puyallup, WA. We set up in a back room with two of the cars from Rat Rod Rockers! and one from Hot Rod Girls Save The World under the projection area. Rat Rod Rockers! screened several times Friday night and all day Saturday. I had to shut down temporarily when a Mom complained about the heavy use of the F-word in the film. We had warnings printed at the bottom of the schedules but obviously some people can't read. My wife and I placed poster easels blocking the area off with big "This Film Contains Adult Language" signs attached. This seemed to remedy the problem. The car show itself was cool- though attendance for the three day event was less than the Mild To Wild staff had expected. It may have been due to the extreme rain storms on Friday or because they moved this years show from the Tacoma Dome to the Puyallup Fairgrounds. Maybe it was the $15 per person ticket price or the economy in general. These things are hard to gauge.

During the car show, I sensed a little bit of back biting from the Street Rod crowd. This is common. These guys spend tens of thousands of dollars to have someone build them a "Show Rod" and don't much like sharing space with the do it yourself gearheads who build their own cars for the tenth the cost. These "Show Rod" guys use the term "Rat Rod" derogatorily. I overheard a few snickers and smug comments while standing behind these old guys reading my Rat Rod Rockers! posters in the hall. "Rat Rod Rockers...sounds like crap to me" or "Let's skip that 'Rat Rod' movie." On the flip side- quite a few people who did watch the film gave us very good reviews. Others commented on the setting. One photographer told me sincerely that the presentation, with the big room, cars and my films projected above them was the coolest thing he had ever seen at any car show. Personally it reminded me of some Modern Art Museum exhibit on Kustom Kulture. Overall a good weekend of promotion for the film.