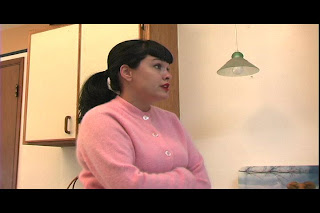 Spent all day yesterday editing Scene 7 of Rat Rod Rockers! Thought I was in the home stretch, then found some glaring problems. Spent most of yesterday correcting two words in the dialog and adjusting cuts to match. One of the best "audio" takes was from an actress reading off camera for another actresses close-ups. To make this work with visuals from another take (of off camera actress audio) I had to manipulate the video portion of the actress by slowing down the video for certain words then realigning the audio and video. This is very very very time consuming, but effective if done properly. I did tons of this type of editing in Hot Rod Girls Save The World and best part is, nobody notices! If they notice- then you have failed to fix the problem. So now the scene is close. I still need to wrap up the ending.

Did an internet radio interview with Casey Ryan and his Cutting Room Floor Show this morning. Had fun getting to blab about my films, internet pirates and the state of the indie-film industry. I don't do as many interviews as I used to back in the heyday of Kill Switch...Klick. Back then I'd run home from my day gig for lunch, do a quick interview with a national magazine or college radio station and then run back to unload trucks. Inevitably the interviews would run long and my boss would get mad saying, "Where the hell were you!?!" Talk about living a dual life.
Posted by D.A. Sebasstian at 7:45 PM