Working on Scene 12 of Rat Rod Rockers! I noticed that on a few shots we ended up with the boom pole in the corner of the frame. This was due to me trying to rush this scenes and looking through my Panasoinic AG-DVX's small viewfinder (i.e. not paying attention). Sometimes you just don't catch these things, especially with complicated backgrounds like forests or reflective areas. In some cases this is not to difficult to remove. Other instances require a bit of surgery as you will see.

In the top two still examples from Scene 12, the boom pole cuts across the upper left corner of the frame. It was hard to see when I was filming,  because it cuts across a reflective window surface. Sometimes by simply enlarging the clip 105-110% you can remove an intrusive pole. I don't like to enlarge frames more than 110% for extended clips because of noticeable pixelation. In the top example frames, I enlarged the bottom frame 107%, then scooted it to the left. This removed part of the pole. I then used a 4-Point Garbage Matte to complete the pole removal process, using a frame without the pole placed in the timeline under the main clip. If you feather the edges of the matte and the scene was shot on a tripod, this can work very nicely.


In the next example, the middle frame is with the Final Cut Pro 4-Point Garbage Matte filter cutout of the frame. I was lucky in this clip to have a few frames without boom pole in them. Those were placed under the main clips timeline (i.e. V1), to fill the Garbage Matte's hole and remove the pole completely. You really need to watch for background light and color shifts caused by moving sunlight, reflections, etc. This will make the "fill in" not match the main clips colors or light properties and thus make the fill quite noticeable. 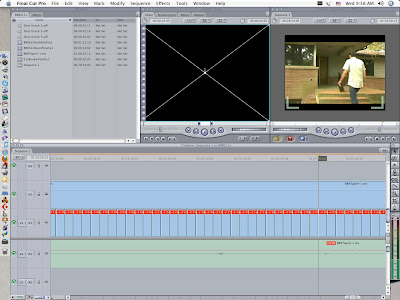 This is a screen shot of the process. V2 is the main clip with the 4-Point Garbage Matte applied. V1 is the still frame without the boom pole. I did not export the frame as a still image, as that can create a color shift. Instead I just grabbed the frame off the main timeline and then cut and pasted it in V1 using the same frame repeatedly. Because there were no major background movements or light shifts, this worked perefectly. You can lighten or darken your still "fill in" frame by frame, but that is very time consuming. Of course the easiest way to keep a boom pole out of post production is to pay attention during filming. What is it they say- hind sight is 20/20.
Posted by D.A. Sebasstian at 9:51 AM