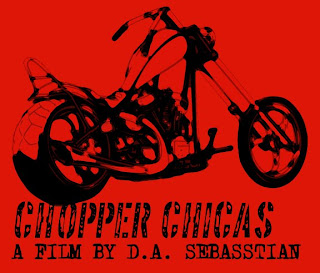 Almost complete with Rat Rod Rockers! Scene 7 editing. Had some continuity issues and again I overshot the scene (shot multiple angles and takes), so I had too many angle and action choices. Sometimes too much is a bad thing- especially if two versions of the scene start competing with each other. Still I am happy with the final choices I made and how this scene is turning out. We have pick-up shots this month to complete all Rat Rod Rockers! filming. A few little fill in scenes.

I also started planning out my bad girl biker flick Chopper Chicas. We may shoot this one next summer, I still have to script it, cast it and line up sponsors and locations. The Legend Of D.B. Petty is also in the scripting stages, but I am writing it as a novel (already on Chapter Three) first.

NOTE: The Horse Documentary I was working on is on indefinite hold. A long story.
Posted by D.A. Sebasstian at 12:17 PM

Wow! it has been way too long since there has been a chick biker film!!