So after a dozen test burns with small audio and menu defects, I finally shipped two DVD-R submasters of Rat Rod Rockers! off this morning. One went to our DVD replication broker in Atlanta via FedEx Overnight the other went to CreateSpace (part of the Amazon.com empire) here in Seattle. I ordered 1,000 replicated discs in cases for the Seattle Premiere + DVD Release Party coming up March 26th at the King Cat Theater. Replication is much cheaper (between $1.20-$1.70 per disc) than duplication ($2.50-$4.00 per disc), but with you must order at least 500 at a time. CreateSpace does very high end duplication and feeds content directly to Amazon.com for DVD on demand and Video On Demand services. 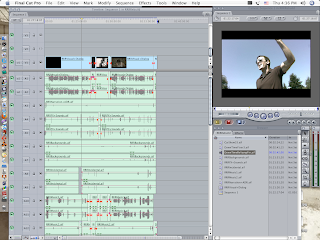 The Rat Rod Rockers! DVD is not perfected yet (in my opinion), but close enough. I could keep working on this film for months and still not be satisfied. I had to pull this cake out of the oven, or risk project burnout (as well as not have any DVD's available at the DVD Release Party). I also checked the Rat Rod Rockers! primary external drive and it still will not mount. I am missing some older files, but have the final audio and video mixes intact and separated enough to do an eventual 5.1 Surround mix or foreign language version of the film. I am also contemplating release of a Black & White version of Rat Rod Rockers! by summer. Next (project wise) I'm digging into our Kustom Kulture print publication with music CD- Munster Style as well as writing screenplays for Evil Undead Girlfiend: The Re-Animation of Issa Kross and Chopper Chicas as well as promoting Rat Rod Rockers! Gotta stay busy!
Posted by D.A. Sebasstian at 5:21 PM